The EU destabilises and blackmails African states to secure its economic interests. 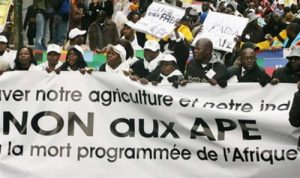 Since the 2000s the European Union has been negotiating so called Economic Partnerships Agreements (EPAs) with ACP (Africa, Caribbean, Pacific Rim) countries as a substitute to preferences offered by the Lomé and Cotonou agreements, outdated along WTO rules. Those regional agreements will result in the opening of Southern countries’ markets to most EU products.

Because of strong reluctance expressed for many years by civil society groups and states, EPA negotiations have dragged on for more than a decade. Many ACP countries have not concluded EPAs and others have only done so under the threat of losing market access to the EU, including the West, Southern and East African countries that began regional EPAs in 2014.

The root causes of this reluctance are the negative impacts expected from those EPAs : disproportionate competition for the African agricultural sector, the loss of much needed tax revenue (needed in particular to ensure the survival of public services such as health, education or infrastructure), inexistent new and/or real benefits from the entry and/or continued access to the European market etc.

The EU has used different kinds of pressure (Development Aid blackmail in particular), and has imposed so called “interim” EPAs on some countries in 2007 in order to maintain pressure on those who still hesitated to sign. To accelerate what the EU believes to be a too slow process, in 2014 the EU again forced the non- Least Developed Countries (LDC) among the ACP countries to conclude the EPAs.

Today, once more, the EU is re-engaging in its destabilisation strategy to force the signature and the entry into force of the EPAs, despite the great threat that they represent for the development of certain economic sectors as well as the regional integration processes.

A leaked document reports on an “expert meeting” that the European Commission organized with Member States in order to discuss the draft documents (“delegated acts”) that allow the – arbitrary – withdrawal of EU market access preferences for non-LDC African states from October 2016.

Hence, if the regional EPAs begun in July 2014 are not ratified before this deadline, exports from non-LDC countries will face – increased – custom duties.

During this ad hoc “expert” meeting that took place on the 23rd of May, 2016, the Commission presented a first draft of the “delegated acts” to exclude the following six non-LDC countries from the list of African states benefiting from special market access under the European Market Access Regulation (MAR1528): Ghana, Côte d’Ivoire, Kenya, Botswana, Namibia, Swaziland.

The reason given for this penalty is the alleged delay in the EPA ratification process. The European Commission wants to impose – unilaterally and without it being legally required – 1st October 2016 as the deadline for EPA ratification (or provisional application). After this date, non-LDC countries will lose their privileged access to the EU market. This deadline is supposedly based on the Vienna Convention of the law of treaties, which requires Member States to ratify international agreements within “a reasonable time”.

It is hard to see why the ratification of an agreement signed in June (South Africa) or in July (East Africa) would already exceed a “reasonable” time line in October.

Yet, even if all regions were to sign the EPAs this summer (including West Africa), the ratification process would still need discussions within parliaments, as every democracy requires..

It is therefore a deliberate pressure strategy against African states, not only to sign but to accept the provisional entry into force of the EPAs, even before the democratic debates have taken place, thus creating tensions between states.

In West Africa, Nigeria and Gambia are still refusing to sign the EPA, for the legitimate reason that it would have negative impacts on the industrialization of the country, and globally on the economy and the society. Côte d’Ivoire and Ghana, which have signed EPAs, are now threatened by the loss of their preferential access to the EU market. Those two countries are therefore put in a situation where they will have to sign and ratify or provisionally implement the interim EPAs they began separately in 2007. If that happens, they – or rather, the European Union – would jeopardize West African regional integration, on which the region’s countries have already spent much energy.

Far from questioning the relevance of these agreements and understanding African and European civil society groups as well as African states’ critical voices, the EU is still seeking to sow the seeds of political dissent in those regions for its own ends, without taking into account the harmful impacts of its neo-colonial politics.

This new attempt to force African countries to ratify or provisionally implement the EPAs, despite criticisms, and the creation of political conditions leading to the destruction of regional integrations in Africa is outrageous. It goes against EU declarations to support development in Africa.

Hence, we call the Parliament and the European Council to: