TTIP will not only affect trade in goods it is also meant to further de-regulate financial markets and services. In particular the European Commission is pushing to further open the access of lobbies to the regulatory agenda on finance which risks undermining existing regulations on both sides of the atlantic – in some cases regulations that were only set up after the financial crisis of 2008. This is even more of a problem considering that the re-regulation of the financial system post-crisis is far from completed. Below you will find some key ressources on TTIP and financial regulation.

For more information and news on these issues check out the TTIP & Finance section on bilaterals.org

Understanding Finance #2 – Financial services in TTIP? (Finance Watch, March 2014)
In this lengthy report from Finance Watch you will some key arguments on TTIP and financial deregulation within TTIP. The report is available in EN, FR and DE

Leaked document shows EU is going for a trade deal that will weaken financial regulation (CEO/SOMO, July 2014)
Analysis of the leaked proposal of the EU for regulatory cooperation on financial regulation by Corporate Europe Observatory (CEO) and Centre for Research on Multinational Corporations (SOMO). 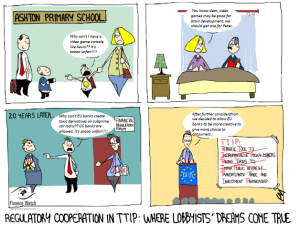 Understanding regulatory cooperation in financial services with a cartoon.

Analysis of data and documents on hundreds of ISDS cases filed so far reveals that foreign investors have already sued at least 24 countries from India to Romania over tax-related disputes – including several cases where companies have used this system to successfully challenge – and lower – their tax bills. If passed, TTIP along with the proposed Trans-Pacific Partnership (TPP) deal between the US and countries in the Asia-Pacific region, would dramatically expand the global reach of the ISDS system.