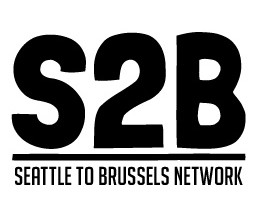 Public discussion organised by the Seattle to Brussels Network and its members Corporate Europe Observatory, Friends of the Earth Europe & Transnational Institute

A public discussion with:

The Investor-State Dispute Settlement (ISDS) is a mechanism that allows foreign investors to sue governments in private tribunals for lost profits, when changes in laws and regulations of the host country affect their profits. While it is common for trade and investment agreements to include special rights for foreign investors, these have become very controversial. Past experiences have shown that investors have not hesitated to use these special privileges to challenge public interest policies, including environment and climate protection measures.

A few weeks ahead of the start of the international climate talks in Paris (COP 21), the outlook is pretty grim, with low expectations in terms of governments’ commitments (especially in developed countries) to address the challenge of climate change. In the context of the ongoing EU-US trade talks and other major trade agreements in the making (including the Transpacific Partnership), concerns have been raised that trade provisions such as ISDS could be used to undermine future environment protection initiatives and climate action even further.

This public event will highlight the risks that provisions negotiated as part of trade agreements – such as ISDS – can pose for governments’ ability to regulate to protect the environment and act on climate change.

Professor Gus van Harten, a world-renowned international investment law professor, will present the findings of his recent report “An ISDS carve-out to support action on climate change”. Van Harten’s recommendation to exclude any possibility to challenge climate related measures from any future multilateral agreement on climate change was recently taken over by the European Parliament in its resolution on the International Climate Agreement in Paris.

Refreshments will be served after the event.

RSVP by 10th November and further information at: natacha.cingotti@foeeurope.org