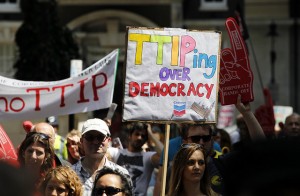 The European Commission has today announced its plan for reform of the investor-state dispute settlement mechanism (ISDS), the investor rights part of trade deals including the ongoing TTIP negotiations between the European Union and the United States.

The main thrust of the proposal is a new Investment Court System which would replace the ISDS mechanism in all on-going and future EU investment negotiations.

Malmström: New #ISDS system “will be a public court.” A public court that is only available to big business?

Natacha Cingotti, trade campaigner at Friends of the Earth Europe, said: “The European Commission’s proposal for an ‘International Court System’ is tarred with the same old corporate friendly brush. Despite a new name and some reforms on the functioning of the system, it reaffirms the granting of VIP rights for corporate investors without giving them any obligations that would protect citizens and the environment.

“The inclusion of investor-state arbitration – albeit under a different name – in an EU-US agreement is not necessary. It would expand its scope to an unprecedented level to all trade between the EU and the US, while now less than 10% is covered by ISDS. As long as companies can sue governments if they act in the public interest, the ability of governments to regulate is undermined. It should be resisted at all costs.”

Greenpeace trade expert Jürgen Knirsch said: “The Commission continues to back a two-speed justice system – a privileged justice for multinational corporations to protect their private interests, and a basic justice for citizens and small and medium enterprises. Environmental, health and consumer protection remain at risk.”

Nick Dearden, the director of Global Justice Now said:
“The European Commission says that this new proposal is based on “substantial input” from its public consultation, but 97% of the thousands of responses it received in this consultation were clearly opposed to ISDS in any form.  This alternative proposal is essentially a PR exercise to get around the enormous controversy and opposition that has been generated by ISDS. The Commission can try to put lipstick on a pig, but this new proposal doesn’t change the fundamental problem of giving corporations frightening new powers at the expense of our national democracies. Cecilia Malmström has yet to give a satisfactory answer as to why our established court system is unable to deal with trade law.

“Although a little more transparency is no bad thing, the real issue at hand here is that of corporate power. Commissioner Malmström says she wants to “establish a new system built around the elements that make citizens trust domestic or international courts” – but she hasn’t explained why those courts are not good enough for multinational corporations to use.

“This change shows the European Commission is feeling the pressure of nearly 3 million people opposing TTIP and CETA, the two looming deals featuring ISDS. But the Commission has at least admitted with this proposal that the ISDS which is written into CETA is unacceptable, so why haven’t they halted the ratification process?

See the reactions of other civil society organisations :

Cécile Toubeau, senior better trade officer at T&E, said: “The EU cannot hide behind a name change when the flaws of the Investment Court System remain the same. Citizens will continue to unfairly shoulder private risks taken by foreign investors, while lawmakers will be deterred from regulating in the public interest.”

“The EU needs to listen to the 145,000 citizens who told them in a public consultation that special courts for foreign investors are not an option. Like ordinary people, multinational companies should rely on the EU and US’s well-developed legal systems which have more than adequately handled foreign direct investment until now.”

Read the May 2015 S2B analysis on the ISDS reform agenda : ISDS: Spreading the disease instead of looking for a cure

CETA, ISDS, TTIP
« CETA – Open letter
To change a BIT is not enough »