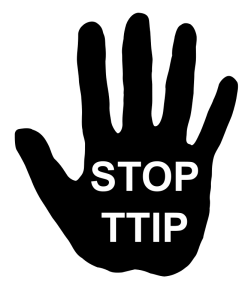 Campaigners have expressed dismay today that the European Parliament ignored the voice of millions of European citizens to express a positive opinion on TTIP (the US-EU trade deal). After angry scenes in Strasburg in which MEPs accused Parliamentary president Martin Schulz of “shredding the rules of procedure”, several much fought amendments were not voted on.

“This corporate court system known as ISDS has proven to be one of the most controversial pieces of legislation that the European Parliament has ever debated. In the Commission’s own public consultation on the issue, 97% of the respondents were opposed to it. In the UK, the parliament Business (BIS) committee said that it was not convinced by the need for this mechanism.

“The only reason that MEPs are still trying so desperately to push this through is because of the enormously powerful corporate lobby machine in Brussels. TTIP is fundamentally an issue of people and democracy versus encroaching corporate power.”

“Of course we praise those MEPs who voted against this toxic mechanism today, including members of the Labour Party. But we clearly have much more work to do to reclaim this parliament from the clutches of big business.”

“The European Parliament vote today is no way binding towards the final outcome of TTIP. Public opposition to TTIP is continuing to mushroom at an astonishing rate and will prove decisive in stopping this toxic trade deal from going through. The fact that pro-TTIP politicians like Martin Schulz are prepared to use such dirty political tricks to railroad this toxic trade deal through means that the enormous coalition that has formed across Europe in opposition to TTIP is going to have to up its game, and that’s what’s going to happen.”

“EU parliamentary leaders will try to spin this report as real departure on ISDS – but it’s nothing of the sort. If enacted, this would still hand massive powers to tens of thousands of US corporations to sue our government.”

“The people of Europe are rightly concerned about the threat TTIP poses to our environment, food, health and social protections – they expected the European Parliament to take a strong stance but MEPs have sided with big business and put democracy at risk by supporting these talks. The parliament has backed dangerous propositions within TTIP such as special privileges for foreign investors and plans to permanently align existing and future rules between Europe and the US which would lead to lower environmental, food and safety standards.

“Ignoring the massive public mobilisation against this dangerous Trojan Horse treaty will only result in strengthening opposition to it.”

“More than 2.3 million people across Europe are  calling for an end to TTIP negotiations in the biggest trade campaign we’ve seen to date. Yet MEPs have chosen to ignore the wishes of their own constituents, siding instead with the business lobby against the people of Europe.”

“TTIP offers a nightmare vision of a world sold into corporate slavery. If our elected representatives betray us by backing this vision, we will have no choice but to escalate the campaign.”