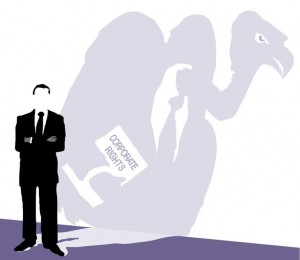 Corporations, backed by lawyers, use international investment agreements to scavenge for profits by suing Europe’s crisis countries. While speculators making risky investments are protected, ordinary people have no such protection and – through harsh austerity policies – are being stripped of basic social rights.

Profiting from Crisis is a story about how corporations, backed by lawyers, are using international investment agreements to scavenge for profits by suing governments from Europe’s crisis countries. It shows how the global investment regime thrives on economic crises, but is very uneven in who it benefits. While speculators making risky investments are protected, ordinary people have no such protection and – through harsh austerity policies – are being stripped of basic social rights.

For a long time, European countries were left unscathed by the rising global wave of investor-state disputes which had tended to target developing countries. In the wake of the global financial crisis, however, corporations and investment lawyers have turned their eyes to potential pickings in Europe. An investment regime, concocted in secretive European board rooms, and that gives corporations powerful rights to sue governments, has finally come home to roost.

The report first explores the history of investor-state lawsuits as a result of economic crises across the world from Mexico in 1994 to Argentina in 2001. As crises struck these nations scrabbled desperately to protect their rapidly sinking economies; the measures they took have since come under systematic attack from corporations. Countries have been sued for measures to revive a domestic financial system or the freezing of public services’ tariffs to keep them affordable for their people. Some measures, such as sovereign debt restructuring (renegotiating terms with creditors) are even required as part of debt deals, yet have been similarly challenged by investment lawsuits.

The legal bases of these lawsuits are the over 3,000 international investment treaties in existence to date. They contain far-reaching protections of private property enshrined in catch-all clauses such as “fair and equitable treatment” and “protection from indirect expropriation”. The trouble is that these clauses have been interpreted so broadly that they gave a carte blanche to corporations to sue states for any regulations that could be deemed to affect current or future profits. Moreover, investment treaties grant corporations rights to protection, without giving equivalent rights to states to protect their own citizens.

Profiting from Crisis looks closely at how corporate investors have responded to the measures taken by Spain, Greece and Cyprus to protect their economies in the wake of the European debt crisis. In Greece, Postová Bank from Slovakia bought Greek debt after the bond value had already been downgraded, and was then offered a very generous debt restructuring package, yet sought to extract an even better deal by suing Greece using the Bilateral Investment Treaty (BIT) between Slovakia and Greece. In Cyprus, a Greek-listed private equity-style investor, Marfin Investment Group, which was involved in a series of questionable lending practices, is seeking €823 million in compensation for their lost investments after Cyprus had to nationalise the Laiki Bank as part of an EU debt restructuring agreement. In Spain, 22 companies (at the time of writing), mainly private equity funds, have sued at international tribunals for cuts in subsidies for renewable energy. While the cuts in subsidies have been rightly criticised by environmentalists, only large foreign investors have the ability to sue, and it is egregious that if they win it will be the already suffering Spanish public who will have to pay to enrich private equity funds.

« The Transatlantic Trade and Investment Partnership (TTIP): A charter for deregulation, an attack on jobs, an end to democracy
How the EU-US trade agreement risks expanding fracking »