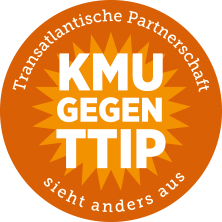 The European Commission claims that TTIP will benefit small and medium enterprises (SMEs) but the opposite is true. Only very few SMEs are engaged in transatlantic trade and the possible negative effects are way more than any opportunities for SMEs. Small and medium sized business which are the backbones of our economies have started to organize themselves and speak out against TTIP. Below you will find key ressources on SMEs and TTIP as well as links to initiatives from SMEs against TTIP.

Study rebutting the myth “SME benefit from TTIP” (german):
The study argues that most SMEs wont profit from TTIP but on the contrary will suffer from it. In those sectors which are most engaged in exports SMEs are underrepresented. Also companies that have trade relations with the US are less than 1% of all companies in both Germany and Austria and are most likely big corporations. SMEs are likely to suffer from TTIP. Cheap competition form transnational coporations in their markets and public procurement on the local level will harm them.

Five questions SME businesses need to ask themselves about TTIP (Feb 2014, More, available in FR and DE)
Important arguments from the Movement for Responsibility in Trade Agreements (More) along the lines of 5 major question SMEs must ask themselves.

The secret business plan that could spell the end for SMEs (Feb 2015 – media opinion, sector-focused UK)
Article on the negative effects of TTIP for SMEs on SME-Insider a UK based news and analysis platform for SMEs.

Don’t believe the hype – TTIP is not for small companies (August 2015, CEO, Englisch and French)
Article by Corporate Europe Observatory (CEO) on the difference of what big business and the European Commission say about the benefits of TTIP for SMEs in the public and behind closed doors.

Con i piedi per terra (on agricultural SMEs in Italy) – (February 2014, Fairwatch, Italian)

A Call for Resistance! From 6 Austrian SMEs – they are the initiators of the “KMU gegen ttip” project – Summer 2015
“We, the smallest, small, and midsized enterprises [of Austria], do not agree with the EU Commission’s view (promoted since the autumn of 2014) that it is above all small and mid-sized enterprises (SMEs) that will profit from the Transatlantic Trade and Investment Partnership (TTIP). On the contrary, we are firmly convinced that these SMEs, which provide the major portion of the value added and employment in Austria, would suffer massively due to the radical opening of the domestic market to multinational corporations. More than nine tenths of Austria’s economy is not involved in transatlantic trade. Therefore, any reduction of intra-EU trade to favor trade with the USA would have serious negative impacts on the backbone of the Austrian economy. […]