TPP and what it means for TTIP 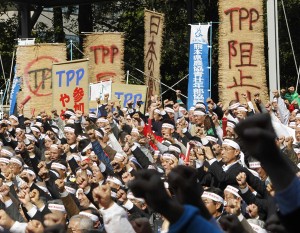 On October 5 it was announced that the TPP (Trans Pacific Partnership) negotiations were concluded. TPP is somehow the counterpart to TTIP, a Trade and Investment agreement between the US and Australia, Brunei Darussalam, Canada, Chile, Japan, Malaysia, Mexico, New Zealand, Peru, Singapore and Vietnam. The conclusion of the negotiations won’t be the last step in its adoption.

The exact content of TPP is not yet known and will only be published in the next weeks. From what is known already, it is more than a classical free trade agreement. While reducing and abolishing tariffs critics argue that TPP will undermine important food and environmental standards by declaring them non-tariff barriers. ISDS (Investor-State-Dispute-Settelment) the system whereby foreign investors can sue states for lost profits due to policy choices will also be part of TPP. Furthermore the big economic disparities between the participating states will make it very attractive for US-firms to off-shore production to low wage countries like Vietnam.

Next steps for TPP

Now the political negotiations are concluded. The Obama administration which is pretty keen to finish TPP before the end of its term will push for a signature by all participating states in early 2016. After that the ratification process begins which means in many countries, like the US, that their parliaments have to vote on the agreement. This means that while the negotiations are concluded TPP is not yet decided.

What means TPP for TTIP

The European Commission and other TTIP-supporters are using the conclusion of the TPP negotiations to create Momentum for TTIP. They argue that the conclusion of TPP puts additional pressure to conclude TTIP and threats Europe to be left out from world trade. The argument that the EU will be isolated without TTIP is simply not true. It is not only questionable that TTIP will increase transatlantic trade but even if that is the case this increase will only happen by replacing trade with other regions, not least within the EU itself. The EU as the biggest market in the world can’t be left out, the fact that big business might be left out from profitable deregulation and cheap but unsustainable resources should not be our concern.

US-Civil Society Organizations reaction to the conclusion of negotiations

Reaction from TTIP-supporters in Europe

Huge collection of materials on TPP