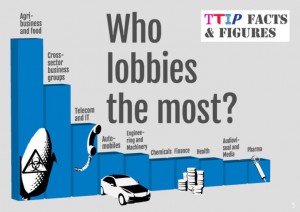 The following articles, reports and papers were produced by a wide range of civil society organisations involved in the campaign against the EU – US trade agreement TTIP. They give an overview of existing analysis and debates on Food, Farming and animal rights in TTIP.

For more information and news on these issues check out the food and farming section on bilaterals.org

Selling Off the Farm: Corporate Meat’s Takeover through TTIP (IATP, CWF, AbL, PowerShift, 100 pages, July 2016)
“The U.S. simply lacks essential rules that should curb the meat industry’s worse practices that cost taxpayers millions in environmental and public health costs. The Transatlantic Trade and Investment Partnership (TTIP) negotiations are already influencing European policy even without being agreed to—this is clear from the EU’s recent decision to scrap their methane cap from their National Emissions Ceilings Directive. With TTIP, the EU industry will also ensure that pending decisions on critical issues such as cloning and glyphosate are made with trade ‘competitiveness’ in mind and not the public interest. A TTIP deal would basically hand over Europe’s animal farming sector on a silver platter to transnational meat corporations–through tariffs and quota expansions, but definitively through the sweeping de- regulatory changes the industry hopes to win through the accord.” Executive summary and press release here.

TTIP: A lose-lose deal for food and farming (CEO – July 2014)
Food is on the table at the negotiations for the EU-US trade deal the  Transatlantic Trade and Investment Partnership (TTIP). From a look at  their lobbying demands, the agribusiness industry seems to regard the  treaty as a perfect weapon to counter existing and future food  regulations. However, the corporate food and agriculture agenda has not  gone un-noticed. The negotiations face rough weather as more and more  people on both sides of the Atlantic are understanding what we stand to lose from this agreement.

TTIP: a recipe for disaster (Compassion in world farming, CEO, Via Campesina, FoEE, Arc2020, 8 pages, December 2014)
This article is an introduction to food, farming and animal rights in TTIP. TTIP will promote an industrial model of food and farming, threatening the survival of small family farms, local food initiatives, standards for healthy and safe food, animal welfare, the environment, and public health.

10 reasons TTIP is bad for good food and farming (IATP, 4 pages briefing, May 2014)
This article details what the US food industry wants. What the industry US food industry lobbying for, and therefore what are probably the US demands? IATP is an American NGO.

Promises and Perils of the TTIP: Negotiating a Transatlantic Agricultural Market (IATP, 19 pages, October 2013)
In this paper, IATP outlines some of the concerns for healthier, more equitable and sustainable agriculture and food systems  : food safety, chemical policy reforms, procurement policies and local foods and the impact of the financial service reforms.

Alternative Trade Mandate Food and Farming chapter (collective, 2 pages)
You can download the complete text ‘Trade, time for a new vision’, including the chapter about Food and Farming

Served by TTIP (Friends of the earth Europe, around 2 pages)
A summary of the food issues and TTIP, with several food-specific graphics.

TTIP: Threatened import of “disinfected meat” edges closer ( Friends of the Earth Europe, 6 pages, March 2015)
EU and national governments have repeatedly claimed that the EU’s  ‘farm-to-fork’ approach to food safety is not under threat, and that food safety standards will not be compromised by the TTIP EU-US trade deal. However, Friends of the Earth Europe believes pressure from US  trade officials and the US factory farm industry is already leading to a  reduction in food standards, and possibly even as a condition for the US to sign the TTIP trade treaty.