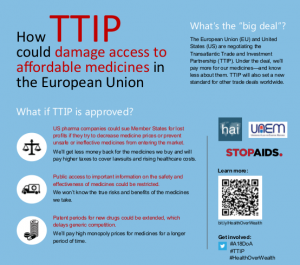 The following articles, reports and papers were produced by a wide range of civil society organisations involved in the campaign against the EU – US trade agreement TTIP. They give an overview of existing analysis and debates on TTIP, health and access to medicines.

Public Healthcare and Social Services Remain Endangered by The TTIP, TiSA and CETA (Health and Trade network, 1 page, April 2016)
Despite assurances by the European Commission that publicly funded healthcare services will be excluded from the TTIP, and demands from the European Parliament that the same exclusions apply to the TiSA, the Health and Trade Network (HaT) remains concerned that the exclusions do not go far enough to protect the State’s right to choose the kinds of health and social care it wishes to provide.

New proposals on regulation in TTIP still threaten public health (HaT, 1 page, April 2016)
The Commission’s latest proposals (March 2016) for chapters on ‘regulatory cooperation’ (which would cover all sectors included in TTIP, such as health services, medical devices, pharmaceuticals or chemicals) and ‘good regulatory practices’ (which would apply to all regulatory decision-making) still pose a threat to public health.

New isds proposal changes to the ttip are not sufficient to protect public health (HaT, 3 pages, April 2016)
There is a profound conflict between trade agreements, public health and treaties concerning human rights and climate change. The new ISDS proposals of the European Commission will continue to enable companies to sue governments over policies that they introduce in compliance with the WHO Framework Convention on Tobacco Control. ISDS continues to be a threat to health.

TTIP and the NHS: don’t be fooled by new BBC ‘leak’ (War on Want, February 2015)
Analysis of the EU initial services offer, and why we are right to worry about public health services.

How will TTIP affect the health of Europeans? (BEUC, September 2014)
“It is evident there are more health issues at stake for consumers in the TTIP deal than publicly known at the moment. The example of the National Health Service in the UK is only the tip of the iceberg.”