1 Million Signatures against TTIP and CETA 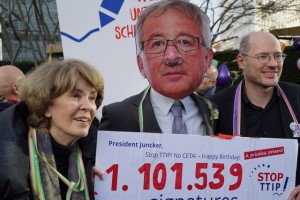 The Stop TTIP coalition, consisting of more than 320 civil society organisations from across Europe, today hosted a surprise party for Commission President Jean-Claude Juncker on his 60th birthday. About 100 activists gathered in front of the Commission building in Brussels to hand over a birthday card signed by one million Europeans demanding an end to the TTIP negotiations and the non-conclusion of the controversial CETA deal with Canada. The million signatures that would have been needed to qualify as a European Citizen’s Initiative (ECI) were collected in under two months – the fastest time that this has ever been achieved for an ECI.

Michael Efler, spokesperson of Stop TTIP commented: “Over a million Europeans are concerned about the future of democracy, and about environmental, health and labour standards under TTIP and CETA. Our birthday present to Juncker is an act of mass, civic engagement with the European Commission, which we are sure he would welcome as the President.”

Mr Juncker was not only greeted with his very own birthday song, rewritten by the activists, he also received wishes for a TTIP-free future. Michael Efler: “On his 60th birthday, Juncker should blow out the candles on these massively unpopular and undemocratic trade deals that are opposed by people across Europe. We also demand from the Juncker-Commission to repeal the old Commission’s decision to reject our ECI on TTIP and CETA. At the very least, we want to be treated as a regular ECI and receive an official reply by the Commission as well as a hearing in the European Parliament.”

The European Commission had rejected an application to run an official ECI in September. In early October, campaigners started a self-organised version of the ECI and have since fulfilled both criteria for an ECI to be successful: One million signatures overall and a minimum amount of signatures in seven EU member states (Germany, UK, France, Austria, Slovenia, Luxembourg and Finland).