The social & environmental consequences of the proposed EU-US trade deal 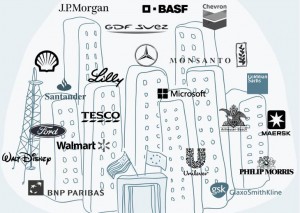 As the second round of negotiations on the EU-US trade agreement kick off in Brussels next week, a new report published by members of the Seattle to Brussels Network (S2B) reveals the true human and environmental costs of the proposed deal. The report shows that the promises of job creation and growth are illusions; and that the real impetus behind a deal comes from major EU and US corporations that have joined forces to remove as many labour, health and environmental standards as possible in a devastating race to the bottom.

A Brave New Transatlantic Partnership highlights how the European Commission’s bold promises of up to 1% GDP growth and massive job creation through the EU-US trade deal are not supported even by its own studies, which rather predict a trivial growth rate of just 0.01% GDP over the next 10 years and the potential loss of jobs in several economic sectors, including agriculture.

The report also explains how corporations are lobbying EU-US trade negotiators to use the deal to weaken food safety, labour, health and environmental standards as well as undermine digital rights. Attempts to strengthen banking regulation in the face of the financial crisis could also be jeopardised as the financial lobby uses the secretive trade negotiations to undo financial reforms such as restrictions on the total value of financial transactions or the legal form of its operations.

On top of that, the investment chapter of the proposed EU-US trade agreement could open the floodgate to multi-million Euro lawsuits from corporations, challenging democratic policiesat international tribunals if they interfere with their profits (see our updated analysis of the leaked Commission proposals for so-called investor-state dispute settlement under the proposed EU-US deal here).

TTIP
« No to a corporate driven agreement
2nd Round of TTIP in Brussels: joint letter of US and EU organisations »