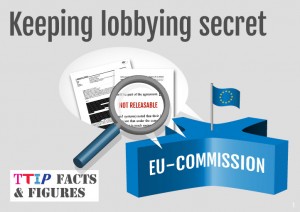 Late March 2014 the Directorate-General for Trade in the European Commission (DG Trade) launched a public consultation on the inclusion of a controversial investment protection chapter and investor-to-state dispute (ISDS) settlement process in the EU-US Transatlantic Trade and Investment Partnership (TTIP). DG Trade does not do this willingly. It was forced to seek a popular mandate for including these investment rules in the EU’s US and Canadian trade deals because of growing opposition on both sides of the Atlantic.

DG Trade tries to use this three-month consultation to wage a “yes” campaign that will let the US deal move ahead as planned. And the Commission will continue to keep other ongoing investment negotiations — like the EU-Canada Comprehensive Economic and Trade Agreement (CETA) and EU-negotiations with Singapore, Japan, China etc. — hidden from public scrutiny and democratic debate. By publishing negotiating texts, that reached us from anonymous sources, and by providing critical analysis of these texts, we hope to enable parliamentarians, academics, civil society organisations, media and the public to understand what the EU, the US and Canada are trying to do during the negotiations.

We are committed to a more transparent and democratic EU and international trade policy. And we invite all interested NGOs, academics and progressive political actors to contribute to this site with their insights and analysis of the leaked investment texts and investor-state dispute settlement generally.