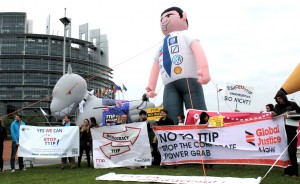 The European Parliament has failed to pass a resolution in support of ongoing Transatlantic Trade and Investment Partnership (TTIP) negotiations. MEPs had been due to vote on 10 June, but the vote was called off. The lack of any vote means the European Commission is denied a mandate from parliament on TTIP. The vote on TTIP would have been the first on the trade deal for the current parliament, which was elected in 2014.

Read the response of some S2B members :

AITEC | Postponed TTIP vote, the Parliament’s failure strips the treaty of any legitimacy  (in French)

CNCD.11.11.11 | TTIP vote postponed at the European Parliament, the inside story (in French)