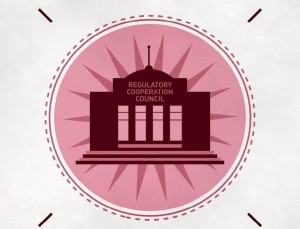 Dangerous Regulatory Duet (CEO, Lobbycontrol, 36 pages, January 2016)
How transatlantic regulatory cooperation under TTIP will allow bureaucrats and big business to attack the public interest. The report examines the origins and impacts of TTIP’s proposals for regulatory cooperation and shows that the process has been dominated by big business right from the start. The examples highlighted in the study are the weakening of EU ambition on the management of hazardous electronic waste, the lack of supervision of the insurance giant AIG in the years leading up to the 2008 financial crash, the free pass offered to US companies on the Safe Harbour agreement that allowed them to ignore rules on the protection of personal data, and delayed or weakened proposals on animal testing, ozone-depleting substances, and aviation emissions. Also available in German.

The planned regulatory cooperation between the European Union and Canada and the USA according to the CETA and TTIP drafts (Legal opinion commissioned by the Chamber of Labour, Vienna, 35 pages, June 2015)
Very useful study of the content of CETA and of the TTIP proposal. The 4 pages executive summary is a recommended reading.

While it aims are reducing barriers for businesses, regulatory cooperation creates a labyrinth of red tape “for European decision-makers and (potentially) national governments, and would have the effect of slowing down, weakening or stopping altogether the development of legislation in areas such as consumer protection, health and safety, the environment, labour, public procurement, energy and food”.
Regulatory Cooperation in TTIP : “Where Lobbyists’ dreams come true” (June 2015, Cartoon by Finance Watch)
Understanding regulatory cooperation in financial services with a cartoon. 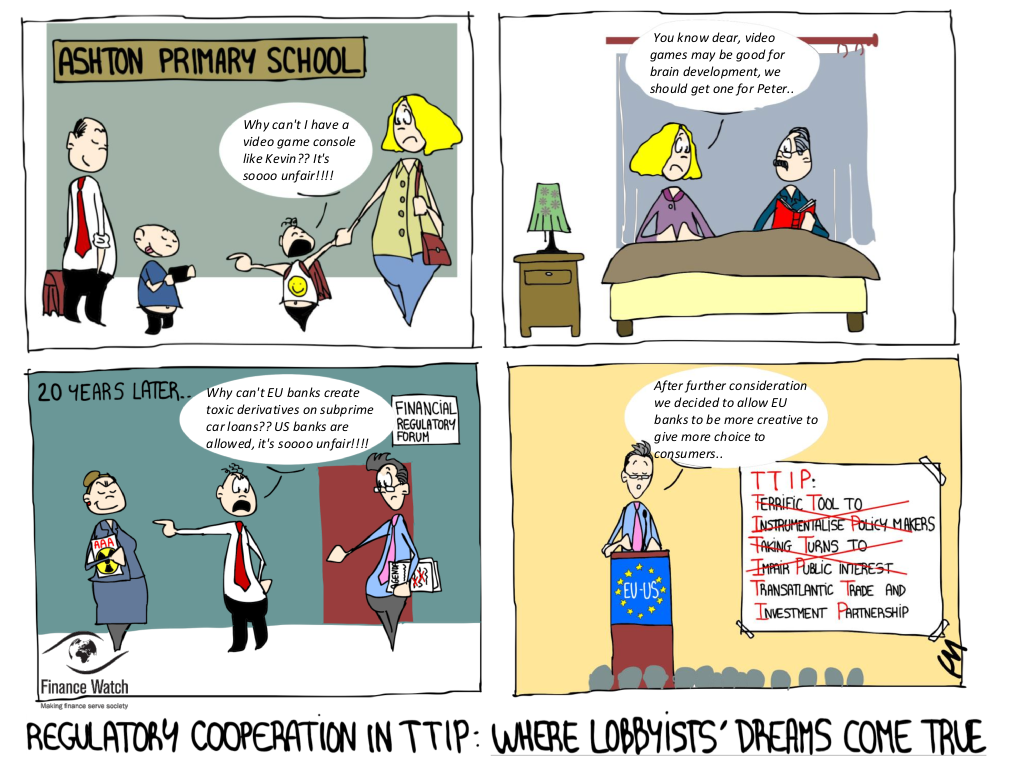 Who is going to pay the bill for regulatory cooperation in TTIP? (BEUC, July 2015)

A blog post by the European consumer organisation BEUC. Regulatory cooperation in TTIP is a dangerous process. It will also be very costly for taxpayers on both sides of the Atlantic, and the European Commission is underestimating this cost, says Monique Goyens.

Regulatory cooperation under TTIP – a risk for democracy and national regulation? (Ecologic Institute, Berlin, 42 pages, September 2014)
Includes a good overview of existing regulatory cooperation mecanisms, including in WTO agreements and in other bilateral free trade agreements.
Regulatory cooperation and the EU deregulation agenda (“Better Regulation”) :
How the European commission is doing the job of big business (CEO, 4 pages, February 2016)
A central aspect of the TTIP threat comes from plans to introduce “regulatory cooperation” between the negotiating partners. Equally dangerous is the “European Commission’s” so-called “Better Regulation” agenda, which is an internal process that pre-dates the EU-US trade talks. “Better Regulation” is promoted as being about cutting unnecessary administrative burdens or red tape at the EU level. In reality it threatens essential environmental safeguards and citizens’ rights. Both processes are creating obstacles and delays for decision-makers who want to introduce new regulations, and they risk creating “regulatory chill” as law makers are discouraged from introducing new measures in the public interest.
Better regulation – TTIP under the Radar? (EEB and partners, 32 pages, January 2016)
Detailed analysis of both regulatory cooperation in TTIP (published before the February 2016 new version of the EU regulatory cooperation proposal), and of the EU’s own deregulatory agenda : the “Better regulation” agenda.
Regulations in TTIP and CETA
Briefing paper: technical barriers to trade (TBT) proposal in TTIP (coordinated by S2B, 4 pages, April 2016)
This short briefing aims at helping campaigners and policy makers understanding “Technical Barriers to Trade” in TTIP.
Sectoral regulatory cooperation
TTIP and Information Communication Technology (ICT) (S2B, CEO, 4 pages, March 2016)
A short overview of ICT related issues in the TTIP negotiations
TTIP and textiles (S2B, CEO, 4 pages, March 2016)
A short overview of issues to watch out for on TTIP and textiles
From institutions :
Environmental protection under TTIP (Umweltbundersamt, 7 pages, March 2015)
Report by Germany’s main environmental protection agency. “This reports presents the opportunities and risks of regulatory cooperation based on the EU proposal concerning environmental protection and show how the planned cooperation can be made more environmentally friendly.”

The Perils of OIRA Regulatory Review – Reforms Needed to Address Rampant Delays and Secrecy (Public Citizen, 11 pages, June 2013)
This  paper focuses on the Office of Information and Regulatory Affairs (OIRA) within the Office of Management and Budget. There is strong  evidence, that OIRA has taken a consistently anti-regulatory posture  across both Republican and Democratic administrations. However, OIRA’s  true impact, including its slow-walk of regulations is not completely  understood due to a basic lack of transparency unique to OIRA.
Down The Regulatory Rabbit Hole: How Corporate Influence, Judicial Review and a Lack of Transparency Delay Crucial Rules and Harm the Public (Coalition for Sensible Safeguards, 40 pages, June 2013)
This reports contains ten practical examples of regulations meant to protect people and the environment which were blocked of delayed by the OIRA.

History, opacity and case studies about OIRA.
CPR’s Eye on OIRA – Public Scrutiny for an Unnoticed Regulatory Powerhouse (CPR)
A list of recent articles on OIRA by the Center for Progressive Reform.

Cost-Benefit Analysis: Bad Numbers, Bad Decisions (CPR)
List of CPR publications on Cost-Benefit analysis. “CPR’s Member Scholars have written extensively on the many  methodological and conceptual deficiencies built into the way  cost-benefit analysis is applied to regulations aimed at protecting the health, safety and the environment. The distortion and over-reliance on cost-benefit analysis is just one of several problems with the way the White House Office of Management and Budget (OMB) exercises its control  over the federal regulatory process.”

Note : Papers on TTIP and toxic chemicals have their own page