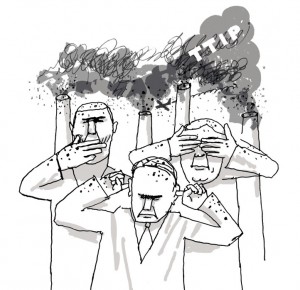 Here is a list of reports, publications, videos and open letters on TTIP and climate, from various organisations on both sides of the Atlantic.

For more information and news on these issues check out the TTIP & Energy and Environment section on bilaterals.org

Five reasons TTIP and CETA are terrible for the climate (Global Justice Now, 4 pages, December 2015)
We can halt climate change, but only by changing the economic and political structures that bind us to a high carbon model. The enormous trade deals currently being negotiated, like TTIP and CETA, will further entrench this model and make it all but impossible to reverse. This briefing outlines the reasons why we have to stop TTIP and other similar trade deals if we are to successfully stop climate change.

TTIP: A box of tricks for corporate climate criminals (AITEC, CEO, 8 pages, October 2015)
Briefing explains why TTIP, and especially regulatory cooperation, could put a stranglehold on our ability to create the energy transition required to tackle climate change.

Dirty hands on dirty deals. How TTIP and COP21 are being shaped by the same big business interests (CEO, 8 pages, October 2015)
What do the UN climate talks in Paris this December, “COP21”, and the ongoing EU-US trade negotiations, TTIP, have in common? Both look set to create deals that work for big business and dirty industry, but threaten people and the planet and undermine the fight for climate justice. The same profit hungry multinationals and their lobby groups pushing TTIP’s corporate power-grab are also intent on wrecking the climate. As a result, shareholders and chief executives will continue to line their pockets whilst trashing our communities and their environments.

Dirty deals: How trade talks threaten to undermine EU climate policies and bring tar sands to Europe  (FoEE, 20 pages, 17 July 2014)
Important FoEE report on the fioul quality directive. This briefing demonstrates how corporate lobby groups are using trade  threats, and particularly the EU-US trade talks as a vehicle to attack,  weaken and delay important environmental regulation still in the making.  The Fuel Quality Directive has already being delayed and potentially  weakened threatening EU climate policies and an influx of tar sands to  Europe.
Exists in FR and ES.

Webinar: Implications of leaked Energy Chapter for our Climate and Environment, with participants from Sierra Club, FOEE, EEB, PowerShift

Ilana Solomon: “In terms of climate and energy policy, TTIP takes us exactly in the wrong direction” (11 July 2014)
Introduction to the issue of energy in TTIP. “There’s been a lot of talk recently about the risks of the transatlantic trade and investment partnership (TTIP) project for Europe and its  regulations. But the consequences on the other side of the Atlantic could be just as dramatic, particularly in the boost it could give to further large-scale shale oil and gas developments”. Interview with Ilana  Solomon, director of the Sierra Club’s “responsible trade” programme.

Open Letter on energy in TTIP (2 pages, July 2014)
Letter from three dozen U.S. environmental organizations opposing an energy chapter or any provisions that lead to automatic exports of oil and gas in TTIP.
What will TTIP mean for food and climate? (June 2015)
This blog-post is written by FCRN (food climate research network) advisory board member Vicki Hird. Only the third part of the article deals with climate, with an agriculture focus.

Foreign Investor Protection and Climate Action: A New Price Tag for Urgent Policies (Gus Van Harten, 10 pages, December 2015)
From a climate perspective, not all investment is equal. Desirable investment in clean energy needs encouragement and protection, while undesirable investment in fossil fuels needs clear policy signals to avoid further investment in destructive activities and stranding more assets. In this paper, evidence is presented on how foreign investor protection provisions in trade and investment agreements tilt the playing field in favor of entrenched incumbents and against urgent action on climate; on the potential for a massive expansion of investor-state litigation and risks to climate policy in proposed trade deals; and on key flaws in recent European Commission proposals to reform investor-state dispute settlement (ISDS).

An ISDS Carve-out to Support Action on Climate Change (Gus Van Harten, 11 pages, September 2015)
Any multilateral climate agreement could be undone when government leaders attempt to implement changes back home. Thanks to the thousands of trade agreements that have been negotiated in recent decades, corporations could mount costly and crippling legal challenges to any environmental legislation that gets in the way of profit. This report formulates an innovative trade deal exemption clause. In “An ISDS carve-out to support action on climate change”, Osgoode law professor and international trade law expert Gus Van Harten suggests a safeguard that allows countries to pursue environmental and climate change policy free from the chilling effects of billion-dollar lawsuits resulting from investor-state dispute settlement provisions in trade agreements.

Climate roadblocks – Looming Trade Deals Threaten Efforts to Keep Fossil Fuels in the Ground (Sierra Club, 23 pages, March 2016)
US focused but very useful report on ISDS and the fossil fuel industry. Contains case studies, useful numbers and a list of 100 of the largest fossil fuel corporations that the TPP and TTIP would newly empower to challenge U.S. climate protections in private ISDS tribunals.

Oil corporations vs. Climate: how investors use trade agreements to undermine climate action (Friends of the Earth & Partners, 7 pages, February 2016)
Short briefing introducing ISDS to a climate activist audience, with a focus on the Keystone XL pipeline case.

Videos: What is the TPP (Sierra club, June 2015, 1.37 min)
In less than two minutes, this video explains the dangers a massive trade deal called the Trans-Pacific Partnership would have on our ability to tackle the climate crisis. Also totally valid for TTIP.

Environmental groups urge Conferees to reject anti-climate provision in House Customs_Bill (2 pages, July 2015)
Letter signed by environmental organizations including Friends of the Earth, NRDC, LCV, and Sierra Club calling on members to  reject the anti-climate language in the customs-bill (linked to fast track).

Trade and climate change policy beyond 2015 (UNCTAD, 4 pages, September 2015)
Report by the United Nation Conference on Trade and Developpement. It is based on the heavily criticized idea that responding to the climate change imperative of reducing global warming should be done without undermining economic growth and social development for current and future generations. Still a good overview with interesting numbers.

Industry:
TTIP: what does the transatlantic trade deal mean for renewable energy?  (August 5, 2014)
Perspective of the renewable energy industry. “Trade partnership between the EU and US could remove barriers facing the  green energy sector, but experts warn of potential dangers”.

Pro TTIP arguments :
In defence of TTIP: Good for the economy – and for the climate ( September 2014 )
By Carlo Stagnaro – see from second part : Putting energy in the TTIP
“Despite some concerns raised by environmental groups, a closer look at the facts suggest that TTIP’s impacts on CO2  emissions will be benign, especially in Europe. In fact stronger commercial links between the two sides of the Atlantic may contribute to  offset natural gas price spikes at the margin, making natural gas more reliable and therefore contributing to contain the trend towards an  increased dependency on coal that has been observed in the past few years in Europe.”

climate, TTIP
« To change a BIT is not enough
TTIP, Food and Farming – Material »